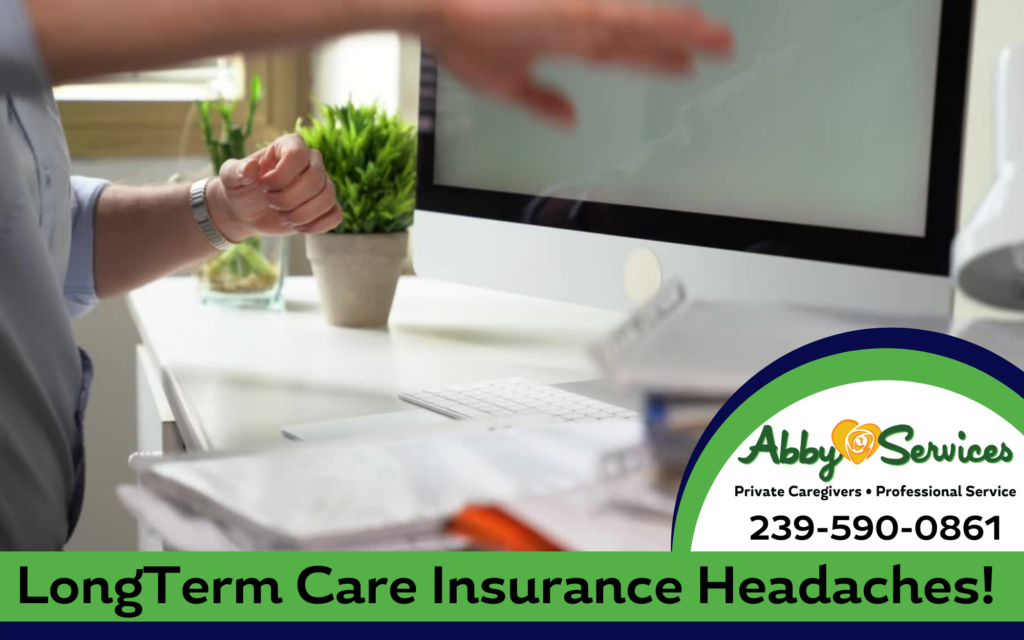 Long-Term Care Insurance can be challenging to navigate.

Abby Services helps seniors navigate confusing long-term care insurance policies to be sure they get all of the in-home care benefits they are entitled to.

It’s no wonder clients can be unclear about coverage benefits or requirements to access their policy. Often the language in long-term care insurance policies can be challenging and confusing to understand.

That is why when a client has a question about their long-term care insurance policy, or benefits, they should schedule a complimentary appointment with one of our owners and  RN Scott Strachan.

Although these meetings can take about an hour, it is important to thoroughly review a long-term care policy, and fully explain its benefits and how they are accessed.

Even when you are armed with accurate information, and thoroughly understand your policy, some insurers have been known to act inappropriately. Here is an article I found with a quick google search:

According to a complaint filed in the District Court for the Southern District of Florida on January 21, 2011, American Nursing Resources Inc. (American Nursing) arranges home health care services for clients, regularly receives insurance-benefit assignments from its clients, and bills insurance companies directly for its services.

Transamerica denied its claim on the basis that the services were not provided by a “Home Health Aide” as defined in the policy. According to the complaint, the policy provided for reimbursement for the services of a “Home Health Aide” if the aide was: (1) eligible for reimbursement under Medicare; (2) employed by a state-licensed or accredited home health care agency; or (3) employed by a provider of home health care services accredited by the National League of Nursing, American Public Health Association, or the Joint Commission on Accreditation of Hospitals.

American Nursing alleges that, by its definition of “Home Health Aide,” Transamerica effectively requires a nurse registry such as American Nursing to either: arrange for the provision of basic services by nurses or other individuals with a level of certification greater than that of a home health aide; become eligible for reimbursement under Medicare; or be licensed as a “Home Health Care Agency.”

American Nursing alleges that this violates Florida statutes governing long-term care insurance, which provide that a long-term care policy cannot: require services to be performed by an individual with a higher level of certification than the services require; require services to be provided by a licensed home health agency when they can be provided by a nurse registry, or require that services be required by Medicare-certified agencies or providers. See FLA. STAT. ANN. § 627.94071.

The complaint alleges that “Defendant cannot define ‘Home Health Aide’ and implement its policy in a manner which violates Florida law by excluding or discriminating against nurse registries as covered home health service providers for basic services. … To do so, violates the Florida Statutes and Rules which by law are incorporated into Defendant’s Policy and give rise to an action for breach of the Policy.”

American Nursing seeks, for itself and on behalf of similarly situated providers, damages for breach of contract and an injunction preventing further denial of benefits on these grounds.

American Nursing has defined the class narrowly to include only Florida licensed nurse registries which, from January 1, 2006, through January 21, 2011, were assignees under a Transamerica long-term care policy and had a claim for benefits for home health-care services provided in Florida denied on the basis that the services were not provided by a “Home Health Aide” under the policy.

The class is also defined to include any Florida-licensed nurse registries currently named as assignees under such a policy. The case is American Nursing Resources, Inc., v. Transamerica Life Insurance Company, No. 0:11-cv-60146 (S.D. Fla.)

Unexpected issues with long-term care insurance are more common than many think.

The situation described in the article above has occurred with a State Farm Long Term Care Insurance Policy a client of Abby Services has. As long-term care insurance experts, we are helping them to work through the insurer’s confusion and hopefully, State Farm will do the right thing.

What do you mean "hopefully the long term care insurance provider will do the right thing"?

Doing the “right thing” would be allowing a claimant to easily and appropriately access the long-term care insurance policy they have paid for as required by law. The specific law the article references is listed below.

Do you have a long-term care insurance complaint?

If you are confused about your policy or believe you are being inappropriately denied long-term care insurance benefits you are entitled to you should review the Florida Department of Financial Services website. They are the entity best suited to help resolve most long-term care insurance issues.
Sometimes, despite attempts to educate insurance providers on regulations in our state, (regulations that they should already be familiar with) you need an attorney familiar with specific state laws, to help fight for the benefits you are entitled to. Below is an attorney you may want to consider.
Stephen Dunn
Phone: (410) 321-8368
Email: sdunn@smdunnlaw.com
Web: https://www.sdunnlawoffices.com/
PrevPreviousDo you know any dangerous senior drivers? When should a senior driver stop driving?
NextAbby Services IC Orientation….. Warning! This is dry reading…….Next