Wow, it seems like there are 100 Assisted living facilities near Fort Myers : The choices can be overwhelming! 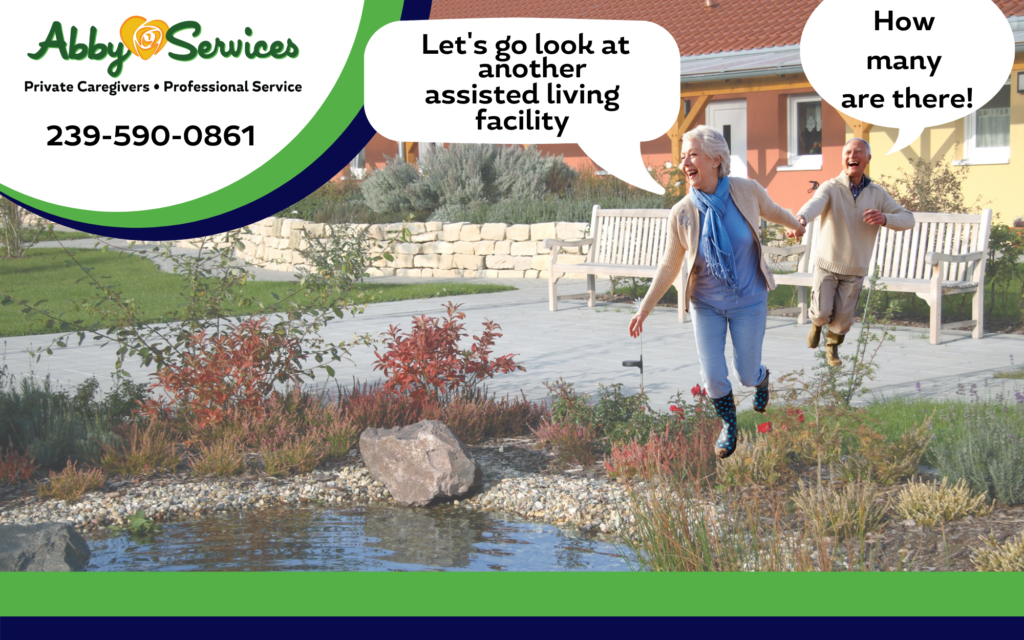 There are many options for seniors seeking assisted living facilities near Fort Myers.

Seniors have many choices when seeking assisted living facilities near Fort Myers. The choices can certainly be overwhelming.

How many Assisted Living Facilities are in Florida?

The median annual cost of care for a private room in an assisted living facility is $48,000 (Genworth Cost of Care Survey).

How to choose the right Assisted Living Facility near Fort Myers.

One way to choose an Assisted Living Facility near For Myers is to ask someone who has worked in our area’s senior care industry for years.

Abby Services has been serving seniors in Fort Myers and the surrounding area since 1997. We have access to, and are familiar with, many of the Assisted Living Facilities near Fort Myers, and we are here to help. If you have questions we are happy to discuss our experience. If you aren’t quite ready to move into one of our areas many Assisted Living Facilities, we can discuss how a private caregiver can help you or your loved one age in place wherever they call home.

We hope the following article can help guide you in choosing the right ALF.

Adapted from Us News And World Report:

WHEN YOU NEED LIMITED HELP with activities of daily living such as cooking for yourself or getting into the shower but don’t want the type of around-the-clock skilled nursing care a nursing home provides, an assisted living facility may be for you. “It’s ‘in-and-out’ service,” explains Mariel Schwartz, a hospice and palliative care social worker in the greater Detroit area and former assisted living facility employee. For example, a staff member may help you take your meds on time or button your blouse each morning, but he or she won’t be with you out with you all day.

“It’s really built on this idea of maximizing independence, offering socialization and focusing on well-being while still offering a home-like environment,” says Rachel Reeves, a spokesperson for the National Center for Assisted Living, which represents about 4,000 assisted living communities nationwide.

Often, the objective is simply to remain in the local area or to be close to loved ones. But where facilities are located also makes a difference in how they operate, due to the laws in that area, Reeves explains.

For example, some states limit how much medical assistance the residences can offer, so if you need a significant amount in those states, you may not be the right candidate for an assisted living facility after all – or you may consider looking at another state.

If you’re pretty independent, though, states with those limitations can work well for you, since the assisted living facilities in those places tend to focus more on socialization than medical care, Reeves says. Specific state data is available on NCAL’s website.

The smallest assisted living facility in the U.S. has only four licensed beds; the largest has almost 500, according to NCAL. Size matters in different ways to different people, though what may matter more is staff-to-resident ratio, says Schwartz, who points out that “adult foster care” is one emerging type of assisted living facility that generally has few residents and as many as one staff member per five or six residents. “That [ratio] is a good thing to consider,” she says, as well as the general attitude of the staff.

Does working with an aging population seem to be their passion, or do they simply clock in and clock out? Size can also affect the types of services offered. Larger ones, for instance, may be more likely to offer amenities like movie theaters and swimming pools, or specialized units for memory care, Reeves explains.

While the typical assisted living facility offers dining services, housekeeping, exercise and wellness programs, and medication management support, some provide tailored services based on specific health needs. “This is based on supply and demand,” Reeves says. For instance, nearly 60 percent of communities now offer an Alzheimer’s disease or dementia program, the same percentage has a diabetes program and about half of facilities house heart and depression programs, NCAL reports.

Many facilities also invest in programs that enhance quality of life – think art and pet therapy, computer and piano lounges, and community outings. “[Ask about] what other amenities they can offer to bring more of the outside world to residents,” Schwartz suggests.

The idea of moving from total independence to a residence with care can be daunting, for sure, so it’s natural to resist trying to consider the next move at the same time. But doing so is worth it, says Dr. Sebastian Sepulveda, a nephrologist in Chelmsford, Massachusetts, who specializes in end-of-life care. “We graduate through different stages of life and assisted living is one of the big ones,” he says. “People should think a little bigger … and think about what’s coming. Assisted living isn’t forever.”

Specifically, some assisted living facilities are part of a larger continuing care retirement community, Reeves explains, and allow residents to move from assisted living to skilled nursing facilities if and when they need to. Others may have relationships with other health care providers they refer to once the resident’s needs exceed what the residence offers. “It’s easy to get bogged down in the here and now,” Reeves says, but it’s important to think about what you or a loved one might need in a year or two – and ask the facility how and if those needs can be met – and what they could cost.

It should be added that In-Home caregivers can assist in this regard. With the assistance of a private caregiver, residents can age in place wherever they call home.

Whether or not you can afford an assisted living facility makes or breaks whether you should consider living there. “Most assisted living residents are paying through personal finances,” Reeves says, like savings, long-term care insurance, home equity life insurance, benefits for veterans or likely some combination of resources.

Folks who qualify for Medicaid, meanwhile, will have a smaller bucket of options, since assisted living is a sort of interim service that isn’t always viewed by Medicaid as a necessity. “It’s a luxury in some ways; it shouldn’t be,” Schwartz says. Still, some facilities take a handful of residents who use Medicaid and other communities are entirely residents on Medicaid.

Facilities differ in how you pay for them, too, Reeves says, whether based on an upfront cost, monthly rent, a la carte services or a tiered system. Once you narrow down your options to those facilities you can afford, evaluate them the same way you would regardless of cost, Schwartz recommends.

You can’t really know what it’s like to live in an assisted living facility until you do it. But you can get a very telling taste if you visit your potential options first. “In today’s age, it’s highly understandable that folks would like to do an internet search and find something quickly and be done,” Reeves says. “But this is also where you or a loved one is going to live for the foreseeable future – you wouldn’t buy a house [from an internet search].”

She recommends visiting the facility, talking to the staff and residents, attending a meal and getting a sense of the environment. “That’s the biggest piece of advice we can give people – make sure it feels like the right environment

So many choices when searching for Assisted Living Facilities near Fort Myers.

The article above may raise more questions than it answers. However, it gives those seeking Assisted Living Facilities near Fort Myers a solid starting point.

One recommendation we usually make is to develop a shortlist of facilities you may be considering. Do not make an appointment, just stop by. Most Assisted Living Facilities near Fort Myers have staff on-site to give a tour, explain their ALF, and answer any questions you may have.

This unannounced visit will give families seeking assisted living facilities near Fort Myers, an opportunity to see how day-to-day living is at the facility.

Use all of your senses when seeking an assisted living facility near Fort Myers.

Yes, use all 5 senses when seeking assisted living facilities near Fort Myers.

Whether you are seeking an Assisted Living Facility in Fort Myers, or need a privater caregiver we can help.

Private caregivers can assist individuals in traditional homes, assisted living facilities, skilled nursing facilities, or even during a hospital stay.

If you have any questions about private care, or the many senior living options in Fort Myers just give us a call, we can help!

PrevPreviousEmergency Preparedness 2022
NextShell Point of Fort Myers Opened As A Retirement Community in 1968!Next