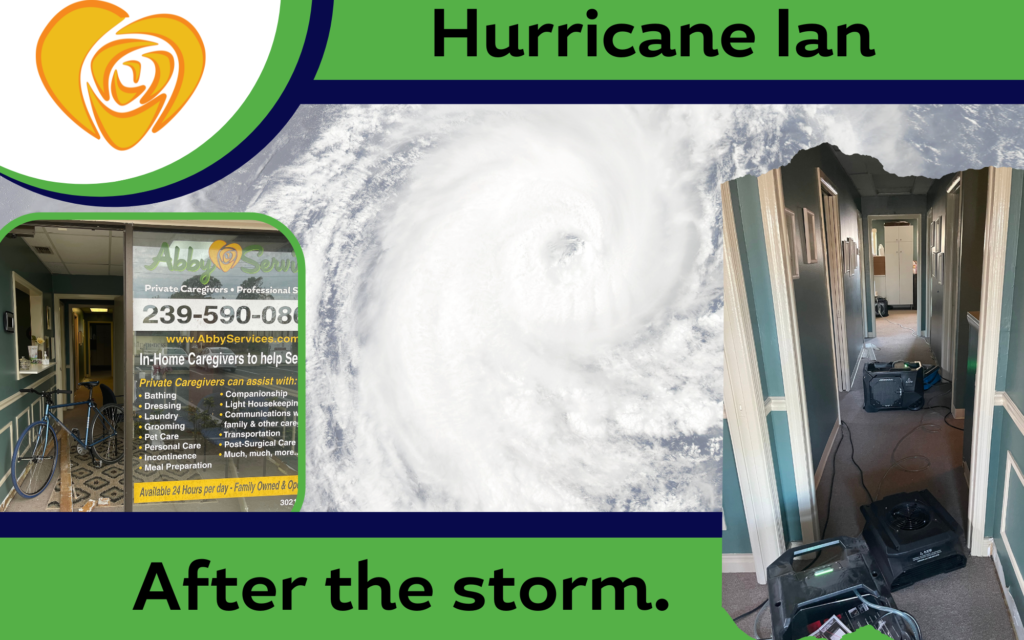 In-Home Care During Hurricane Ian: Keeping Seniors Safe And In Their Homes.

Abby Services In-Home Care, helps seniors remain safe in their homes by referring our area’s best private caregivers. Even though Hurricane Ian seniors in Fort Myers, and Cape Coral received the care and support they needed from private professional caregivers.

Even if you are not from the greater Fort Myers area, you no doubt have seen the devastation of Hurricane Ian. Everyone in our area has and is still living their own individual hurricane story.

Unfortunately, it will be a long time before our area’s hurricane story is through. This is our Abby Services Hurricane story. It is not meant to diminish the significant impact others have felt. We are eternally grateful that our personal homes survived the storm with minimal damage and that our business received minimal damage.

The long-term success of our local family-owned senior caregiver business will depend on a number of factors. We fully intend to continue to provide excellent service and value to seniors and their families who are seeking in-home care as our area recovers and rebuilds.

Before the storm: Plan and prepare.

Abby Services is required by the Agency for Healthcare Administration (AHCA) to have an emergency plan in place. This emergency plan was activated while Hurricane Ian was still called tropical storm #9. At that time, we notified all caregivers and patients that this storm may affect our area. We encouraged all in-home caregivers to help their clients confirm individual hurricane plans and be sure supplies were in place. Caregivers and their clients continued as they normally would.

As Ian developed and approached it appeared that, while we may feel its effects, we would not be as severely impacted as we later found we would be. The hurricane’s projected path was trending toward Tampa. Most clients chose to remain in place with the supplies they had secured with their caregiver’s help. Caregivers continued to service their patients as normal.

With Ian’s continued approach, the hurricane models were updated to show that Ian’s path was projected to come directly to Fort Myers. This led a number of patients to evacuate with family or friends out of harm’s way.

Some clients receiving private care at facilities chose to evacuate out of the area per their facility emergency plan. These patients were given the choice to continue with their in-home caregivers’ care while sheltering as far away as Miami.

We are proud to say that even under these challenging circumstances patients and their amazing private caregivers were able to continue to receive the personal caregiver support they wanted and needed.

We did have clients who even chose to remain on Sanibel Island despite our encouragement to evacuate to a safe area. They were informed, and aware, that their caregivers would not be able to support them, but that services would resume as soon as things were safe.

Fortunately, these island residents, despite significant loss and damage, remained safe and have since evacuated off the island and are now residents at our local assisted living facilities.

During the storm: Clients chose to continue to receive in-home caregiver support.

During the storm, Abby Services had patients, and their families, who had made proper preparations for food, water, protection, and gas/generators, who chose to continue to receive the support of their in-home caregivers. This support was provided before, during, and after the storm.

Caregivers and families communicated independently to ensure patient needs were met. Caregivers helped clients in non-traditional ways such as waiting in extended lines for gas to power the generators needed to continue their comfort and safety.

We are particularly proud of the communication, support, and relationship between these clients and their caregivers. Fortunately, through the storm, we were able to maintain communication. However, our area’s electrical and internet network was certainly strained. Together with their private caregivers, clients were able to effectively communicate and maintain the services they needed and wanted.

How did Abby Services Maintain Communication During One Of Fort Myers Most Severe Natural Disasters?

During the storm, and as part of our emergency plan, Abby Services has the ability to operate remotely. This was accomplished through technology (and a little bit of luck). Abby Services team members distributed throughout the area were able to maintain communication and operations. Our team and our distribution helped to ensure caregivers and clients continued to receive the support they needed during a particularly difficult time.

While communication and power were interrupted at our office and homes in the McGregor/Whiskey creek area, team members in Alva and Babcock Ranch had limited interruption.

Despite being directly in Ian’s Path Babcock Ranch residents maintained power and internet connectivity throughout and after the hurricane.

How did the Abby Services Team Weather The Storm?

Not gonna lie, a natural disaster of this size and scope is scary. As stated earlier our homes only suffered minor damage. Our office did have water damage but was intact overall.

While our area receivers we continue to operate remotely (while still providing full service to caregivers and in-home care customers).

Scott Strachan did have a car flooded while it was parked at Healthpark Hospital where his (amazing and beautiful:) wife Meredith Strachan works as a nurse.

Even as our area was picking up the pieces, and the Abby team was working remotely, Scott Strachan who lost his car to Ian,  would bike to the Abby Services Offices to help ensure they were able to continue to meet our area’s private caregiver needs.

That remains to be seen. Being a small family-owned business can be challenging. Abby Services was able to continue to serve patients seeking in-home caregivers throughout the COVID pandemic. This was not easy but did help to limit COVID exposure for a number of area residents who otherwise could have been exposed in other settings. Our business like many others had suffered for years due to the COVID pandemic.

COVID was hard, but recovering from this hurricane will be especially difficult. Currently, we are evaluating what residents have been displaced, what local assisted living facilities sustained damages, and what caregivers are available to provide in-home care services. We will no doubt work to continue our mission to help area residents find great caregivers at a great price.